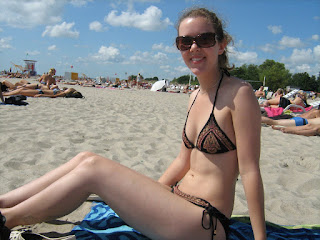 Friday was our first of two free days in Pärnu so of course, we went to the beach!! My day started out beautifully by skipping breakfast and sleeping in, then heading to the beach around 1pm and staying until 6pm. We were accompanied for part of the time by some the Estonian guys we had met the night before. One of them had brought their guitar along so it was a fun experience laying on the shores of the Baltic, listening to Estonian songs on the guitar (along with some Lady Gaga…).

Now many of you readers back at home may be wondering how cold the water is, being so far north. The Baltic Sea (at least in the little bay at Pärnu) is amazingly warm; probably far warmer than I’ve ever felt Lake Michigan be. Also, it stays shallow forever. You have to walk out in the water for probably a quarter of a mile before it’s over your waist. I don’t even know how far you’d have to go for it to be over your head. I imagine that contributes a lot to the warmness. Luckily, we had great weather and sunshine all day so I could work on my tan.

After the beach and dinner, we went to a place called the Bravo Club which was a decent place. Typical European club with creepy men standing at the edges of the dance floor, trying to decide who will be next to experience their expert dance moves. Did I ever mention that European men (at least most of them) CANNOT dance? I mean, I’m not saying American guys are any better, actually American guys don’t even attempt to dance but in a way I guess I prefer that to some random hotshot thinking he’s all smooth trying to sneak up behind me and dance with me. Ugh, I just don’t like dancing with guys anyway…they just mess up my groove. I like the Latin and ballroom dances of course but when I’m dancing to hip-hop or techno, I really prefer to do my own thing.

Anyway it was a fantastic free day. The beach and dancing can always brighten my mood, no matter how many overly flirtatious and unattractive men there are in the world.