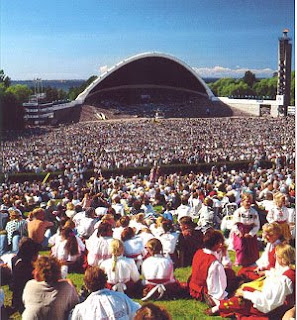 Today was the day of the Song Festival. We walked down to the grounds where there were hundreds of thousands of people milling around, waiting for things to start. There were food stands and beer tents and lots of diversions for us. I ate some kind of interesting meat filled pastries. They were kind of like mini pasties but not quite the same filling. Maybe some cabbage in there? Anyway it was one of the best things I’ve eaten since I got here. To see the concert, we walked up to the very top of the hill and sat on the grass. We were pretty far away though so we couldn’t see very well and the sound was a bit quieter than I would have liked. Still, it was pretty amazing to get a glimpse of the thirty-some-thousand singers on stage, and hear them singing in unison. It was really beautiful to hear their unofficial anthem which we’d heard in the documentary. I felt pretty privileged to have been able to attend such an event that only happens every 4 or 5 years.

The Estonians have so much pride in their country but it’s not an obnoxious pride like so many Americans seem to have (USA’s #1!! Fuck yeah!!!). Their pride just seems to be more pure, more for their heritage and what they’ve been through to become an independent country. I think the States have lost that somewhere along the way. I also thought it was great how EVERYONE stood up for their national anthem. Even the punkish kids that were sitting in the grass behind us. I mean, we were at the very back of this huge crowd, nobody would have noticed if they’d stayed seated but they stood up to respect their country. I’m not sure some American teenagers would do that nowadays.

The only bad part of the day was the weather. Unfortunately it turned rather cold and rainy at the start of the concert so we only stayed for the first part. Then Brittany and I grabbed a cab home to avoid the long walk home with the sky spitting at us. If it had been nicer, I definitely would have loved to stay longer and enjoy the festivities.

P.S. I did not take that picture but I thought you might want to visualize that amount of people in one place.