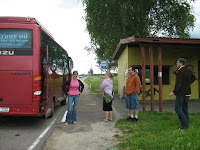 Oh what a day!!! Nothing was planned for today except moving from Tallin to Tartu. You would think this would be a quick and simple process but everything is always more exciting in a foreign country.

We were driving along through the countryside (which looks amazingly similar to Michigan), and I was pleasantly dozing while listening to my iPod, when suddenly, after 2 hours of being on the road, we pulled off to the side. The bus had broken down!! So there we were, stuck on the road, surrounded by beautiful yellow fields and an abandoned little yellow brick building with graffiti. We had to wait for at least an hour for a different bus to come rescue us. It was a pretty cold and windy day, very much like fall, and the other American group from San Diego was freezing, hahaha. One girl said she thought it was going to snow. Well, at the point, all the MTU students thought it was pretty hilarious and we all just said “Eh, feels like home.” Houghton certainly does produce character-building-cold. But we finally arrived to Tartu, which I have found to be a very lovely city. It’s a bit smaller than Tallin and I think I like it more. Our housing is better too. They’re cute little rooms with private bathrooms and mini-kitchens. 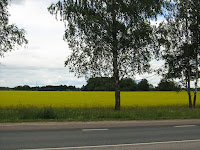 The weather is still a bit too chilly for my taste but I’m sure I’ll survive. Sometimes I wonder if Costa Rica wouldn’t have been a better choice for nothing other than a change in weather. Estonia is almost a little too similar to the UP. I like to feel like I’m escaping when I go abroad but here it’s cold, and I’m surrounded by MTU students. I guess it’s comforting at least. So here I am in a new city for the next 5 days. I think I’ll like it here.