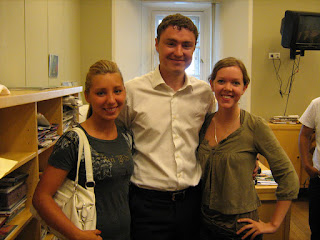 Today was probably my favorite day so far. We started off with a tour of the parliament building, followed by a Q & A session with Taavi Rõivas who, at the age of 29, is one of the youngest members of parliament. It was really interesting to get his take on Estonian politics. Apparently much of the parliament is quite young because it’s only been running since 1991, and most of the politicians at that time had been involved in the communist party of the USSR and therefore booted out. I guess now the whole internet craze makes sense…old people would never go for that. He even said we could add him as a friend on facebook. This country is just so funny sometimes. It’s so small and everyone is so familiar with each other, going out for drinks with a parliament member or striking up a conversation with one of them on the street is totally normal. It’s very relaxed.

The more time I spend here, the more I am convinced by my growing idea that Estonia, although part of Europe, is VERY different from France or even Germany and the other places I’ve visited. It’s a totally different atmosphere here. At times I feel like it’s heavier and more depressing because of it’s long and dark history but at other times I can definitely sense it’s pride and happiness in being an independent country. Today we went to the dance festival which is part of the huge song festival they have every 4 years or so. It was amazing. It’s so awe-inspiring to see 7,500 people dancing all at once in front of you with choreographed movement and traditional dress. I finally feel like I got a real sense of who the Estonian people are today, and it was beautiful. Tomorrow evening we’ll be attending the actual song festival where 100,000 singers will be on one stage, all performing in beautiful harmony. I guess about 500,000 Estonians will end up being present which accounts for nearly half of their population. Can you imagine that I’ll be seeing HALF of their population?

Anyway, although I’m very happy with my experience here so far, I have not been entirely impressed by the local cuisine. For example, the first day I was here I had this soup called Saljanka (I think). It was this odd mix of pork, sausage, chunks of lemon, black olives, onion, pickles, and God knows what else. I’ve never had anything like it and I’m not sure I’ll ever care to again. It’s not like it was bad…it just wasn’t very good. They also seem to eat an overwhelming amount of potatoes in various forms, which have been good but sometimes they too are put into strange mixtures of beets and pickled fish which makes this odd, chunky, purple mess. But maybe I’ve just been getting the wrong things. So far the best things I’ve had have been Turkish pita’s (those Doner things which are popular in Germany), and some good Italian ravioli. It’s all right though, hopefully it won’t make me gain weight like I did in France .J